Licking their wounds but exceptionally buoyed by the initial victories against the Billhooks, the Orphans relax a little.

Monger the Cutter continues his efforts to restore the honour of House Laudius. Taking a new line on this, he uses his usual means of enforcing compliance (and not the subtle pandering of his father).

Repairing the house itself - not quite to the way he remembers it from his childhood, but close. Hiring a new batch of servants - some of whom are old ones who retired or moved on when funds ran out. They're trading in Leviathan products again, and 3 or 4 butcher shops are reopened to sell once more. The feel is different, the sourcing is more aggressive and heavy-handed - maybe even illegal. 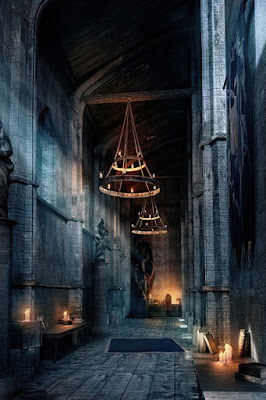 Ghostblade the Whisper heads down to the Silver Swan as usual. In Brightstone the news is rarely of any interest to her, this time she hears about something unspoken concerning the Strangford family and she's about to move onto more interesting things.  However, then she hears about this recalcitrant son Orlan who is being forced to come in from the cold by Lord Strangford himself.

She returns to the Orphans' lair to find Orlan, the leader of their adepts, packing a bag and tidying up all of his alchemical benches. He is returning to his family estate (just on the other side of Charhollow). She can't let him leave them in the middle of this war and tells him that she's set a spirit to spy on him until he returns. Anything it discovers will be fair game for them to use. He tells her that the family are aware of their Cult already and will definitely make a move against them if he doesn't go. So she lets him, reluctantly.


Quess the Spider visits with Skannon, a widow of a Leviathan Hunter's quartermaster. One of her children is aboard a ship still, but another - a son called Aldo was recently slain in his local the 'White Horse'. Quess realises that he must have been one of the Billhooks that the Wicked Mother consumed. She keeps her poker face, but offers to put her other child, a daughter called Casslyn into service in one of the new butcher shops that House Laudius is putting back in business.

Quess also continues to develop her informant inside the Billhooks. A younger son of the proprietor of the 'White Horse', Brogan was obviously there to witness their terrifying sacrifice and while that means that he knows who she really it, it also means that he's exceptionally afraid of her and what she can really do. She promises that they won't do that to him, so long as he provide her with exactly what she requires.

With their surprisingly effective opening salvo against the Billhooks, the Orphans now have a real fiendish reputation. Despite being in the middle of a war they are now as well known and generally regarded as they were before it erupted. New and previously reluctant gang members return to swell their ranks.


The Orphans want to keep up the pressure on the Billhooks. They have divided up the Billhooks remaining turf with Ulf Ironborn and they hatch a plan to take their share. Having saved some choice cuts of the dead Billhooks they stake out every skeletal hand on the street corners and walkways marking out the turf boundaries.

Undertaking a ritual to make everyone who lives inside that perimeter know that the Orphans now rule it, Ghostblade becomes aware of another presence nearby who seeks her attention.

A spirit, long dead, but bound in service to some powerful devil, grabs her hand. She struggles with it, trying to resist its pull and then to sever its connection with its master and control the spirit herself. However to do that she must sever it in the devil's presence.

Monger follows her through labyrinthine tunnels which end up somewhere under the city - she is sure that she could find it again, but Monger is lost. There, in a strange and disturbing room sits the Forgotten God, Throne of Judgement.

Cutting the chord joining the spirit to the Throne, she feels a deep chill in her bones and her fingers burn with frostbite. It insists that they gift a favour. They agree and hear of an impending funeral of the Strangford matriarch. They must intercept the funeral cortege and recover the coin from her mouth and bring it here.

They both know of the traditional Akorosi custom, placing coins in the mouths of the dead. It's a meaningless ritual and the coins are usually destroyed in the electroplasm of the crematorium (though the gold coins used by richer citizens end up in the Spirit Warden's coffers). This must be the family obligation Orlan had to abandon them for...


Next Session: Closing the Noose
Played by Donogh on Friday, February 24, 2017