Ghostblade the Whisper, Monger the Cutter and Quess the Spider are trying to come up with a plan to deal with the war they've found themselves in against the Billhooks. They realise they're terribly outnumbered, especially since some of their gang members have gone to ground or need to be guarding their assets permanently (just in case).

Keel, one of Quess' assassins comes running into the lair. She was with Noggs and Milos in the Red Lioness and the Billhooks hit them hard. Ten or eleven of them barged in and attacked without warning. She barely made it out the back door (the shoulder of her jacket is torn and there's blood dripping down her arm) - they shot at her as she made her escape. They didn't seem to harm any of the pub's patrons, they just came for Orphans.

There's an undercurrent of suspicion in their questioning of her about the affair, but they quickly move back to a plan (though with a bit more urgency). 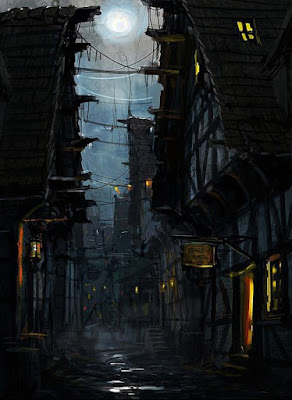 They definitely want to see if they can get Ulf Ironborn on their side - he's not friendly with the Billhooks already. If they can coordinate some kind of sly surprise attack with a frontal assault from Ulf's warriors it could be devastating. They get Strangford to start working on some kind of bomb, maybe to be set off by some kind of spiritual or physical artefact they can steal from one of the Billhooks leaders.

From what they know of the Billhook's leadership, getting to their real leader would be difficult - Tarvul is in Ironhook Prison. His sister Erin seems more canny, and his son Coran seems a bit more predictable (in a rash thuggish sort of way).

Monger heads off to try to get an invitation to meet with Ulf; he's knows Sercy from the Grinders and they're friendly with the Skovlander. Sercy cautions Monger about this guy - he's brutal and power-hungry and has a general dislike for native-Akorosi, She shows Monger in the front door of the Old Forge, gives Ulf a nod and walks away, leaving Monger alone in the snug with Ulf and a half dozen of his friends.

Quess sits down with Strangford in his workshop. Over the course of a few hours, she secretes as much Standstill as she can - it's draining, but at the end of it Strangford assures her that he has enough to make into a weapon that'll freeze a whole roomful of Billhooks.

Ghostblade heads down to the White Horse with Fancy Frank, a public house the Billhooks are known to frequent. The barman, a old fella called Brogan doesn't have much to tell them, except that it's Coran's favourite watering hole, where he can avoid his aunt. Ghostblade reaches out into the ghost field and quickly finds a young girl's wandering ghost below in the basement: Bertie died recently of sickness, but has not been claimed yet. Ghostblade promises to find her peace or a body to occupy in return for a warning when Coran returns here next.
Fancy Frank scouts the surrounding neighbourhood, finding a perfect place to spy the two entrances and sweep the rear alleyway. He even spots an ideal spot for a hidden Monger to take advantage of those taking cover from sniping fire.

In the middle of these arrangements, they hear from Keel again - she went out to bring in everyone who they hadn't seen safely to their lair when she came across Hutchins (their trusted but reclusive antiquarian) and Amosen (one of Strangford's adepts) dead in the street. She spots a few Billhooks trading stories with the Bluecoats at the scene and fled before they noticed her.

Ulf pushes the chair opposite him out with a foot, and tilts a head that Monger should sit.
-You'll share a dram of the good stuff with me?
He pours a generous portion of whiskey into Monger's glass. Monger downs his own drink in one, and then reaches over for Ulf's drink as well. Ulf doesn't stop him and sends a meaningful glance at one of his friends at the bar.
-We're making a move on the Billhooks. And we reckon you'll want to get in on some of that action.
Ulf's unimpressed
-What's in it for me? How about I just wait until you're both neck-deep in each others blood and then pick up the pieces. You'll be too busy to pay me much attention.

Monger doesn't really have the wherewithal to proffer a better argument in favour of an alliance. So instead he cuts to the quick.
-If you don't join in, I'm going to visit your place and kill everyone else who lives there. Your family, your maid, the boy who cleans out your shit-pot in the morning. And then I'm coming for you!
Ulf leans forward and then his friend at the bar slides off his stool with a belaying pin to crush Monger's skull. The Cutter is on his feet in an instant and his glass hammers into the guy's eye socket, sending him to the ground screaming in agony. Ulf and the others surround him and then Ulf grins.
-Shit! You've got a serious pair on you lad!

The work on the details of the double-pronged attack on the Billhooks. It'll go down in Quinn's tomorrow at noon.


Bertie gives Ghostblade the signal that Coran and a few of his people are at the White Horse. Marlane has been recruited for the initial part of the attack as she's not known to the Billhooks. She's got Strangford's device in a tote bag and she walks into the bar, as nervous as she usually is before a fight (which is to say, not one iota).

The device fires when she pulls the lever and she along with Coran and his five buddies all freeze. Brogan and the rest of the patrons are unaffected (except maybe for the shock). Keel, Wester and Farros (the only of Quess' killers still up for a fight) are with Quess and Fancy Frank watching the perimeter and when they hear the device go off, they swarm inside. Monger and Ghostblade comes in the back door from the alley way where he had been lurking

The Billhooks are quickly tied up and lined up on their tables. The look of terror on their faces as they realise that they're going to be sacrificed right here and now to the Wicked Mother will live with the White Horse's patrons for the rest of the lives. Ghostblade begins an incantation calling their God's attention to this sacred act of murder and Monger pulls out a razor-sharp blade.

The Standstill has worn off, and now the struggling and screaming begins as, one by one, their throats are cut and their blood sheets across the rough wooden tables and onto the floorboards.

From behind them the door opens and in walks their alluring and transcendent God. She remains pristine through the carnage and wipes one finger along the table covered in Coran's welling blood. Licking it with relish, she then tears his soul out of his body and consumes it whole. The five other souls are claimed with less immediate hunger.

She turns to her assembled cultists. Staring into their eyes, each of them feels as if their contribution to this bountiful offering was crucial to its success and their presence vital to her well being.

Marlane and everyone else in the bar is astounded at her presence and will probably talk of nothing else for days.

The Orphans walk their God back to the lair in proud silence.

After the victory, Monger plays up his drunken bender and he ends up in Quinn's the next morning. The Billhooks arrive as if on cue. There's about twenty of them, and Monger's position about halfway back in the bar gives him a brief moment of panic. If Ulf doesn't show up soon he's dead meat.

The Billhooks storm in and Keel and Farros open fire from the staircase. Monger pulls the trigger on the blunderbuss under his table and several of the Billhooks go down. Then they hear roars from the front door and Ulf and his compatriots arrive just in the nick of time.

Fancy Frank is sitting in a booth to one side, and has a pair of pistols in front of him. One of the Billhooks jumps him and they struggle up close (closer than the Hound would like). Quess leans over the partition from the next booth to stab the Billhook in the back, but the glass and wooden frame collapses and she ends up in a dog pile with them. The Billhook pulls out a grenade and throws away the pin - he's resolved to die hard.

Monger is being backed up by Wester in the middle of the bar and they're coming thick and fast at the pair. Ulf's tearing through the Billhooks, caught in the close quarters around the bar's entrance where their numbers and large fearsome weapons are more of a hindrance than a help. There can't be much left in them now.

Quess grabs the grenade out of the Billhook's hand and chucks it away, but instead of landing in the middle of the enemy it explodes right in front of Monger (throwing him to the ground and Wester (killing him outright)

But it's over, only a small handful of enemy has escaped.


Next Session: Summary Judgement
Played by Donogh on Friday, January 20, 2017