Previous Session: At the Watering Hole

Fox, the Operator runs her gigs. She's doing a little surveillance for Lopez - seems like Jackabacka is cheating Lopez with a little bit on the side. The basement dweller is doing a lot better than he should. He's even been hiring heavies, and Lopez doesn't like anyone reaching above their station.

She also has a curious delivery job. She needs to head out to the badlands to pick up a package and return it to Lopez. They head out in convoy, and arrive at the rv spot just outside the valley to find a metal box there. They can see a speeding vehicles driving off in the distance. The seams on the box have been duct-taped, but the key is taped to the lid. It'd be easy to get inside, but that might be seen with suspicion by Lopez.

Kim, the Savvyhead hunkers down next to the box, but it won't speak to her like other things do. In the dust, with tumbleweed rolling past, she's reminded how lush the valley is, in comparison with the rest of the world.

For Kim, opening her brain is like sinking into a warm bath where weird but familiar things sooth her and whisper. These cute and cuddly beings make cute monster noises (she knows that they are horned taloned monsters really). They emerge from the water to regard the box, but they recoil, submerging again - they don't like the Box!

They get the fuck out of there. Driving back towards Lopez, they go along the highway - where rusted abandoned cars have been pushed to the sides of the road - there are some who make a living from clearing the roads around here. 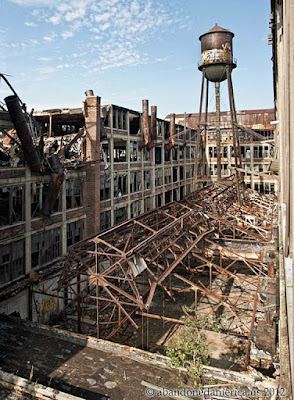 Back in the city they deliver to Lopez' fortress. It's a huge oval-shaped building in the middle of the city. It used to have multiple gates inside, but all but one have been barricaded since. It's got no windows and they've never been inside. It dominates the marketplace and is across the road from a bunch of lived-in tower blocks.

The guards at the one remaining entrance spot their convoy, and Buddy comes out to meet them. He's got a shaved head and biker jacket. He carries an SMG but it's slung behind him when he's talking to them.

A bit of flattery from Fox, suggesting he's Lopez' right-hand man, greases the wheels a little. But he's having none of it. Dee and Martinez are well-established as Lopez' lieutenants. She gets paid not problem, but they're definitely not getting inside this time either.

At the Watering Hole, a hulking brute comes in for a tattoo from Dusk, the Skinner. This particular loudmouth hard-ass, A.T. works at Johnson's Hacienda. He has a neat crew-cut and a big beard and isn't afraid of showing off his muscles. He already has some ink, but it's not great (and Dusk notices that he only has one is from the Johnson's).

He's half drunk already (a bottle of rot-gut from the bar is in his hand) and he has cause to celebrate; he looks around to make sure no one else is listening before he tells her that he killed one of Chum's boys earlier with his rifle and he wants to flaunt his prestige. He's enthusiastic about getting a grinning skull on his shoulder, but he doesn't think that the price he got quoted by TumTum could be worth it.

Dusk smiles at him, and takes off her vest to show him her gorgeous tattoos. Two sets of connected dream-catchers adorn her - one set on her belly and the other from her shoulder blade to the centre of her back. He's impressed, and drops any notion of haggling with her (indeed, he's probably going to spread word that TumTum's is the place to be).

She pitches an idea to him, playing into his obvious machismo and skill with his rifle. She traces out an ancient war rocket, with flaming jets spiraling up his arms and then an explosive POW! which'll only become perfect when he clenches his fist around a gun or to punch someone.

A.T. is relatively sedate during the long job, but it's obvious that this extended length of still discomfort is unfamiliar to him. They chat a lot, and she gathers he's been working at Johnson's for three harvests. He bristles at any suggestion that he's not favoured there (due to having just one Hacienda tattoo) but she assures him he'll get all the attention he deserves now. He gives her a few juicy details on Johnson's operation (which will surely come in handy down the line!).


Kim is working on some kind of device to see inside any box. After mulling over her options, she reckons it'll take a lot of attempts, she'll need to dedicate weeks of time and she'll need to seriously increase the amount of power she have available.

Fox wonders if maybe Sanders has some excess power and is willing to collaborate with Kim?

He's holed up in a factory under the shadow of Lopez' fortress. Sanders lives alone there and doesn't enjoy sharing space with anyone. So Fox and Kim head over there for their usual pre-market visit, usually just to get their ducks in a row. The run-down concrete building has great steel roller-doors on one side, but they've never seen those open - they always use the side doors.

When they enter, Fox spots him up on one of the stairways, drawing back from a high air-vent with a stick/mirror combination - he's pretty cautious, and he peers at them through his milk-bottle glasses. Kim appears to sway his suspicions after she describes his solar-panel setup (using some impressive techno-babble). She implies he might get a little more out of her if she shares with her, and he sends Fox outside.

Fox shakes her head at Sanders - he's surprisingly frisky for an old man. She sits on the bonnet of her truck outside, baking in the sun. She spots a kid and three scavengers skirting around buildings nearby - maybe it wasn't wise to leave Brother behind. They startle when they see her though and take the next turn to avoid any confrontation. After a while she hears dogs barking in that direction.

Kim tells Sanders what she needs. She'll turn up with her device in the middle of the day in the next few weeks to test the prototypes. After they have sex, Kim has a much better idea of how he works. He's losing his sight, slowly bur surely; and those glasses aren't going to cut it much longer.
He's afraid of Lopez - he's so reliant on his protection, but he and his people are so scary and powerful he could just decide to hole up in there and not keep the streets safe for Sanders and people like him; the Scum could return at any time.

When she digs a little deeper, she finds out that he's running out of the silicon he needs to make the solar panels. Once that happens Lopez will just kill him. The folks over at Logger haven't been delivering lately, and he's afraid to send Fox specifically to pick it up - worried that word might get out. Logger is a hundred klicks to the other side of the valley and across the burn flats. He hasn't been there in 30 years.

Sanders can only provide 4 panels for the market at Watering Hole (he usually provides 6). They'll have to charge more - just make sure Lopez doesn't find out. In fact, he wants to go with her, but Fox tries to talk him out of it; it's not up to her.
-To hell with Lopez!
Sanders shouts. They need to come up with a plan so that Lopez doesn't notice that he's left or get Kim to scope out the market for silicon. Kim gets wind that everything isn't ok now, and presses him to admit that he's run out of raw materials for the panels. 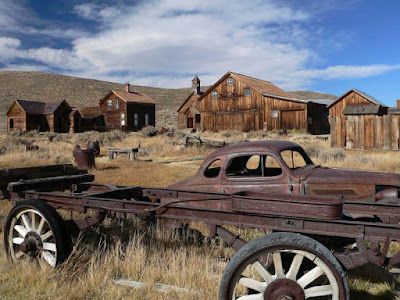 Before Market Day rolls aound, Fox brings her crew to Watering Hole. They get a great parking spot outside TumTum's; they'll be hunting for information on silicon and Logger before things get too hectic. After being under the shadow of Lopez' fortress Watering Hole seems a bit slapdash. It's got rudimentary defences with a makeshift gate, and all the buildings are a little bit ramshackle. It's noisy though, with the sound of trucks, and shouting and general hubbub.

Dremmer is at the door. When Fox and Kim and Brother arrive at the door, he's checking them out; people need to leave weapons at the door and be vouched for. As Brother unloads his arsenal, Fox asks Dremmer about Dusk.
-Careful, city girl
warns Dremmer. Despite his appearance, all bristling and bulky, his voice is kind. He looks like he's ready for a war, spikes and grenades adorn his rigging. He has a lot of metal on his face and tattoos elsewhere. Taking their weapons and putting them into the slot, he returns small ticket stubs for them to reclaim them later; they notice he's very careful about his personal space, he doesn't like anyone touching him.

Dusk walks out, with a short glass in her hand and a bottle of whiskey under her arm. Her sudden appearance catches Fox off-guard. But Dusk has her full attention on Dremmer. She touches his arm as they catch up. She's brought him a bottle of the good stuff to tide him over, pouring him a shot and then tucking the bottle into one of his pockets.

They head inside and Fox is buying a round, so Dusk sits down with them. TumTum brings over a flagon of rot-gut for them.
-Your friends from the City?
-These people are from Lopez
But after that Dusk twists him arm into opening a bottle of the good stuff for them.

Fox and Dusk start talking, and Kim heads to the bar; she's not interested in their intimacy.
Fox makes the leap that Dusk has been waiting for - she tells her an embarrassing story about herself, not the usual cool Fox that everyone else knows: turns out that last time they met, Fox was all set to ask Dusk on a date. Turns out that's enough to get Dusk really interested in her.

Kim's fishing for information. TumTum stands behind the bar. His chocolate skin glistening with sweat. He's not wearing any top, and his bald head and big belly stand out here. His arms show ten year-marks from the Tungsten Hacienda (they're known as hard but fair).


Next Session: Market Day
Played by Donogh on Thursday, September 15, 2016