With the Eels wiped out, the Orphans take over their boat house, with its gear and a single undamaged gondola - should come in handy. 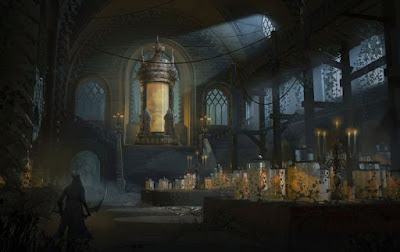 With Gap missing, Fancy Frank and Ghostblade off working a different line, Monger wonders if Quess will help them out and take on a greater role in the Orphans than just leading the gang of stone-cold killers. 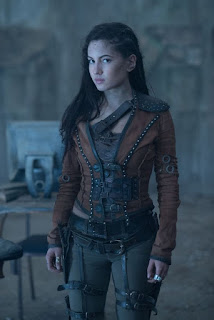 Quess Salkara, aka 'Dogbreath' is a SPIDER. The Tycherosi is adept at weaving the web, and is Venomous (secreting the poison Standstill through her hands at will). She comes from a family of Tycherosi fishers, but used to dive for artefacts in the void ocean to sell them on. She's made her way to Doskvol and left that life; but drops into local fisher families who've lost their boats to keep their heads above (literal and metaphorical) water. Quess' demon mark is the gills on her throat that allow her to breathe underwater for a while. She wears a sharkskin bodysuit.

Quess' closest shrewd friend outside of the Orphans is Salia, an information broker. A regular in the same pub as Quess chose. Salia treated her well (despite the common prejudice against Tycherosi) and started trading information to her in return for fencing the best of recovered gear from Quess' diving.

Augus, a master architect hired Quess for her first assassination; it was to kill his son-in-law, a feckless dilettante. But for one reason of another, the job was bungled and the wife (Augus' daughter) ended up dying as well. Quess killed the second guy (responsible for bungling the kill) but it was never going to repair the trust.

Strangford relays a message (take through the monthly augury) from the Wicked Mother, that she wishes them to acquire a cult artefact from one of the Forgotten Gods - The Hand of Sorrow. The cult renact a mock ritual from their long history every few months across the bridge from their temple in Barrowcleft, and the Orphans must use that opportunity to steal the Tree of Woe, while the hour-long procession takes place. They will make a sacrifice, a healthy adult coiled in thorns, which springs from the blasted and eradicated stump.

They quickly find a telling vulnerability All of the cult members go to this important ritual, so the only people left behind at the Temple are a few hired thugs. They go to the bar for a few days in a row where those thugs frequently have a couple of rounds, and quickly get hired on as extra muscle.

The day of the procession, they head to the Temple, and they're made to drop their weapons (their obvious ones at least) into a strongbox at the gate - only wooden weapons are allowed inside the courtyard. They climb into roughly made black robes, and the gate is opened.

As they enter the high-walled courtyard, they are impressed by the main building. As decrepit as it is, once this was a grand merchanters mansion. The wings of the house almost encircle the courtyard, with grand staircases rising up to a high veranda. In front of them though come a few dozen grey-robed cult members, climbing out of a long staircase which descends below the main house.

They are chanting in some eerie and lost language, and incense is wafted around. As the cult pass the four guardians (two genuine, two scoundrel) they notice that most of the left hands look freshly burnt.

In the centre of the group is the sacrifice - a naked man and they are horrified to see bloody thorns coiled around his body, and in some places growing out of it. The briars are dark red and they sense hunger from the man (or maybe the thorns).

The cult leaves, and they close the gates behind them. Quess smiles at the other two and goes into full charming mode. They're used to her touching their arms and back from their time in the pub, so it doesn't seem odd when she does it now. The Standstill knocks them out quicker than they realise something's wrong.

They slowly descend the stairs, and this room feels dank. By the time they've reached the bottom, the floor is covered in moss and they hear trickling water. Low-hanging branches touch their hair and they go deeper into the room - they avoid those after they notice the razor-sharp thorns.

It's cavernous, and way too big. But in the centre, they see the Tree of Woe. It's an ancient war-spear, and out of the shaft comes a briar. Black and dangerous it coils around the spear until it rests on the lugs just below the spearhead.

They gingerly poke at it, and the briar reacts by growing towards them, seeking them out with some primeval sense.

They take out the strong leather gloves and cloak they'd packed away and wrap up the spear. As soon as it leaves the ground, the sense of the cavernous expanse goes and they suddenly feel claustrophobic.

On the way out, Monger stabs the guards, and they flee back to their lair.

After things calm down a little, the Cult's reputation has risen significantly, and they begin to get more recruits - the ranks of Strangford's adepts and Quess' killers swell.

However, there is a downside - Adkin, an occultist who was happy to work with them on some more esoteric projects, starts working for the Hand of Sorrow - one of the two guards they just killed was his brother.

In order to reduce the heat they're feeling, they put out a rumour, that the Lady of Thorns (another cult of a Forgotten God) was responsible for stealing the Tree of Woe.


Next Session: Eviction Notice
Played by Donogh on Friday, June 24, 2016