Previous Session: A Den of Vipers

As the others emerge out of the dungeon with the bedraggled young woman, Devon gets a Trump contact. It's Llewella, who's worried about them - and wonders what the hell they've done. It appears that the guards have just gone into their lock-down positions throughout Castle Amber! 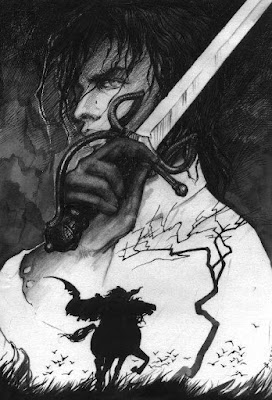 Thomas and Stavros run out the main exit doors as a diversion, while Devon, Rowan & Trixabelle go deeper into the unknown nooks and crannies of the north-west tower to escape. As they walk, Trixabelle transforms into a guard she has seen before. With the full uniform and unshaven lantern jaw, it's quite the transformation.

Slinking out a postern gate, they're challenged by a sentry, and Trixabelle schmoozes her way past them until a casual question from him gets everyone's back up. From behind Rowan cuts him down; the guard was good, he notices the movement at the last moment and tucked his head behind the blade of his halberd, but Rowan's attack was at an unusual angle which circumvented the defence. Blood splatters all over Trixabelle's tunic and she takes Devon's cloak to hide it.

They quickly go to her curio shop to catch their breath and plan. Rowan and Devon turn on their harried guest, demanding to know who the hell she is. She wonders if she might have some tea and change out of her rags first, but the glare she gets from Rowan ensures that she understands any dilly-dallying will end in her spilt blood.

She introduces herself as Dara, grand-daughter of Benedict, and a princess of the Courts of Chaos. She claims that Finndo grabbed her as a hostage when beginning his campaign against Random, but their attempts to dig deeper into the particulars of that story are interrupted...

The front door is smashed in with a single blow and they hear Gerard's bellow! They run out the back door and make for the alleyway. At the back gate though there are four liveried guards with halberds waiting for them (one of them looks familiar; like the guy Rowan just murdered a half-hour ago!)

They fight them, Rowan and Devon make short work of them, with Devon's darts being a deadly surprise. Trixabelle's backdoor, narrow as it is, only invite structural damage as Gerard charges through it and they flee, using darkness and shadow to escape at a key junction.

Trixabelle morphs into Gerard and they walk out the front gates, and around the city wall to the fleet at anchor. Blustering their way through the captain of the guard (on high alert for intruders) they take a yacht and sail for the horizon.

Under Rowan's command, with Dara below under Trixabelle's watchful gaze, they make best speed for the horizon. Once they're out of sight of any pursuit they can think about where to head.

A tall mast appears behind them, it looks like a serious warship, maybe even Gerard's flagship. Trixabelle shifts them through Shadows, plowing through a purple squall to find green seas and iridescent yellow seaweed. They must find this Chaos army and turn over Dara to their protection. They lose their pursuers and Trixabelle must rest - the shapeshifting and the hell-riding have taken it out of her.

Down-below, the two have a brandy-fuelled discussion about her family, status and the real reason she was taken by Finndo as a hostage. A little more information is forthcoming - really Dara thinks that she counts as a double-hostage, both against Amber (particularly Benedict) and against Chaos.

Up on deck, Devon gets a Trump contact; expecting Llewella again, however it's actually from Fiona and she assault his mind immediately with a compelling argument in favour of his turning the boat around. He can expect mercy in return for his cooperation in returning the prisoner to King Finndo's prison.

Devon eyes up fighting Rowan, but considers himself outmatches and aims for subtlety instead. He waits at the head for Dara's bladder to fill and when she approaches he intends to push her off. However at the vital moment, he struggles against Fiona so that he mis-times his attack and instead of pushing her off, is pushed himself into the Ocean.

Rowan saves him with lifebuoy and Devon vouches for Dara when he ends up on deck and before Rowan can cut her in two. (Tacitly, as proof of good faith) She takes over moving through shadows.

At a headland overlooking a huge river estuary is an arrayed army. Black and silver banners flutter over the host, of armoured Myrmidons (actual ant-creatures) and red grizzly bears

Dara curses. She must leave them, as this is no army of Chaos but commanded by Corwin, Prince of Amber. Their relationship is...complicated.

She steps away, disappearing into the depths with Logrus and they make landfall.

Email ThisBlogThis!Share to TwitterShare to FacebookShare to Pinterest
Labels: Amber