The Belly of the Beast

Wire the Chopper comes to Dusk the Skinner & Kim the Savvyhead pitching a deal for her to take Purity over. Pierre has gone mad (apparently), pushing up prices and running the whole operation into the ground. That poses a real threat to life in the Valley, and no one can afford to stand idly by.

TumTum & company are busy with the clean-up of the bar. Mopping up blood and carting bodies out is grisly work. They notice a dead but unwounded Partridge - she has a huge bloody wart on her back. And then out bursts a silvery centipede; there's panic in the bar and Kim captures it in a bucket.

She does a hasty autopsy on Partridge, discovering that the lurgy has another stage - it incubates the physical manifestation of the weirdness inside the host, to emerge once the host is dead. 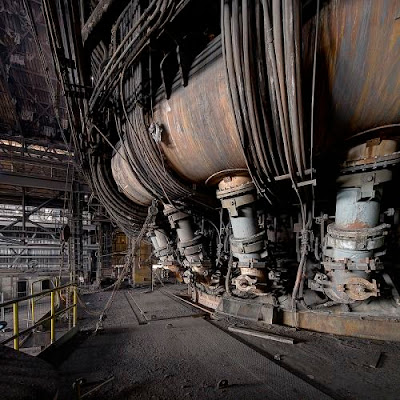 Well, they need to do a delivery to Purity for the Valley's water-purification requirements, so they're going to have to deal with it one way or the other...

Before all that, if you recall, Fox the Operator has been missing for ages.


She was dragged away from Brother's bedside by Johnson's people while he was unconscious. She gets treated to the same ass-kicking as Wire got. But this time, they know they've got the right person in revenge for Mad Bill's injuries. So she gets it much worse than the Chopper did.
After a round of beatings, they brings in the tools. Hammers, pliers and needle files. Amongst the lowlights, they cut off a couple of her fingers, and sew her eyelids and mouth shut. After what seems like months, the door is opened by strangers (or at least what passes for strangers after weeks of intimate agony). An voice from her past tells her that Mr. Lopez has been looking for her for ages, and they're getting her out of there.

On the road to Purity, the convoy comes across D & Martinez carrying a barely recognisable Fox to their car. Kim takes her to her van and removes the stitches, taking away the worst of the pain with her healing touch. The sunlight appears to do wonders for her. Dusk is aghast at the state of Fox, and feels guilty (should she have guessed Johnson would go after her?) D relates that they've been hunting for her for some time now, and had to kill a few of the hacienda's people to get her out.

When Kim wonders about her solar panels, they shrug. She'll swing by later and pick them up. When Dusk gathers that D & Martinez intend to bring Fox straight back to Lopez, she asks if they could go back in and get the solar panels - maybe head up to Purity with them and then they can all go back to Lopez together? They're ok with that, and come back an hour later, with fresh cordite coming off the barrels of their weapons.

With Kim stopping for her usual repairs for the hill marauders, the other push on to Purity. When they get there the place is quiet and deathly quiet. There's no response on the radio, and Dusk suggests that they wait a while; someone must be up there. Wire takes some of her crew inside, infiltrating the dark pipes at the base of the cliff. The gungy mess in there is an assault on their senses, but this is their best way inside.


Back outside, suddenly the quiet is shattered by screeching and clanking as the bus descends - but there doesn't appear to be anyone inside. Kim is overwhelmed by a sense that everything is hunky dory and rushes to get in the bus when it reaches the bottom - dumping her phazer into her van before she locks up.

Fox is in for some ass-kicking, at least for not sticking around and waiting to see what happens. She draws her 9mm and joins Kim in the bus. Dusk obviously feels like this is crazy - whatever's inside Purity is going to try to kill them, one way or the other! But she grabs a pump-action from Navarre's buggy and climbs in as well.

Kim is scanning the place as they ascend, she can't spot anything living, but it looks like there's something blocking her scan of the insides somehow. At the top of the ascent, they can spot a couple of blackened corpses on the gantry connecting the bus to the main entrance. Just behind the controls lies an almost dead Ulla - there are lumps on her body (though they're not quite 'ripe' yet). She groans to Kim as the Savvyhead examines her
-All gone to shit. It spread too fast

Dusk eyes up the darkness within Purity, and calls to Pierre, but there's no connection. Anything she felt the last time is just flapping lifelessly in the maelstrom.


Below, deep below, Wire is going deeper and deeper inside the bowels of Purity. She's nervous, but Gritch is sure they entered through the right pipe. The slope on the pipe is going down, and not upwards and even Gritch's optimism starts to decline after a while. But then, they reach a hatch high up in the ceiling - they have to wrench hard to open the wheel (it makes quite a racket). There's a ladder inside the tight shaft leading upwards, and they all get onto it. They take care not to put too much weight on any section of the ladder; it's a little old and rusty.

Wire reaches the top of the climb, and in the dark room, lit only by the torch strapped to her head, she spots her (long dead) parents. She freaks out and loses her grip on the ladder, smashing into Gritch behind her and causing mayhem below.


Entering Purity, the noise of the maelstrom has faded, only noticeable in its absence. The loss of connection is freaking Dusk out a little - it remind her of the feeling she had crossing the wastelands on her long trip to Lopez years ago.

There are lots of shadows flitting out of sight, and they are wrong turns aplenty. Kim sees her dead brother, terribly wounded beckoning to her. There's a cave in the other way, with an open access panel inviting them in. Graffiti above promises "As Above, So Below". Dusk is not going in there for love nor jingle and Fox stays with her. Kim goes down, and in the deep sand below she finds the feet sticking out.

She meets up with Wire & crew. With extra lights, they see blood spray and demented graffiti on the walls. Behind a closed door, Kim finds a handful of people chanting in a circle around Pierre; they wear dirty robes and she spies a dread portal behind them.

Wire kicks in the door and opens fire on the assembled cult. Kim directs her brain's aggression on Pierre to stop him from chanting and with a frightening look on his face, Pierre's stomach explodes, his guts writhing on the ground. Kim is grabbed back by Wire, and the Chopper chucks a WP grenade inside closing the door just in time for it to be crumpled by the terrible explosion which drowns the sounds of the screaming.


The way out to the bus is elusive and then they spot wires leading to explosive along the top corners of the corridors.
Played by Donogh on Thursday, June 08, 2017