With Fox nowhere to be found, Brother joins up with Wire's crew, making his van available for their raiding/resupply trip.

Kim the Savvyhead is burning the midnight oil on her cure for the affliction that is now spreading beyond Purity. She is wearing her gas mask at all times (apart from inside her shed in Watering Hole). She's a hermetically sealed...well, hermit. Hearing rumours, she visits Madame Cho about her girls being sick and briefs Ripper before heading over. Ripper takes out this marvellous fully enclosed rebreather helmet - it makes Kim quiver.

Dusk the Skinner takes in the hacienda she's now responsible for. Johnson is fiercely proud of his work in taking it from Chum - he tells her how the old guy couldn't keep order and his labour force revolted against him. It was best for everyone that Johnson invaded when he did. 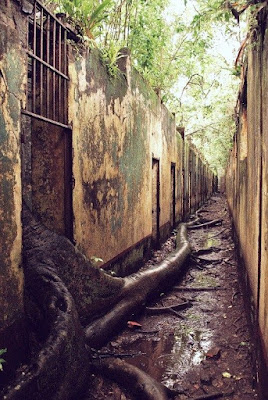 Johnson leaves Dusk to take stock and she calls in the whole gang (it's about half and half Chum's and Johnson's). She stares at the dozen tough nuts in front of her, mulling her options over.
-No matter what you thought til now, you work for me now, and you all work together. If anyone thinks they can't leave their old loyalties behind they'd better walk now...
There are a few glances and awkward shifts
-If I find out anyone's been talking to people off this hacienda about our business, I'll have their hide. I mean, say for instance, someone was letting Johnson know what I'm up to. The rest of you are going to beat the living shit out of that poor bastard.
Killer is boring a hole in the floor with his eyes.
-Who knows this place best?
A young, scrawny thing sticks up her hand. Haystack is her name. Dusk addresses the rest of Chum's old crew.
-You happy with her being in charge of the gang for a while?
There are a few ribald snickers, but no actual dissent (tacit or explicit).
-Well, ok then. When you're out there, you have to mix it up, no sticking to old cliques. Set up shop and send in the workers.

About 40 tired and hungry workers shuffle in. They're not meeting her gaze and don't volunteer anything when she introduces herself and tells them that she's going to change the way things work around here. She's not used to talking to a crowd of people, usually she's most effective one-on-one or with small groups.
-You're going to work for a wage. And once things stabilise we're all going to share whatever profits this place can make.
There's a bit of murmuring after that, and the couple of guards who stuck around with Pinky to oversee this meeting exchange glances.
-After a few months if anyone wants to leave, they're welcome to. I'll tattoo any extra bands you need on your arm to walk out of here. Just remember in the meantime, as far as any hacienda owners outside are concerned you're still just slaves.

She spots a familiar face in the back, a guy called Lang who used to trade trinkets throughout the Valley. He's used to be able to take care of himself, mostly by talking his way out of any trouble. She remembers he was one of her first customers when she set up her place behind TumTum's a few years ago. She reckons he'd be a good person to pick to be a temporary leader, like Haystack.

Damn it if that doesn't touch a raw nerve with the rest of them for some reason. They hurl abuse at him, (calling him 'Stinky') and when she pushes him aside to call the loudest of loudmouths forward she finds herself standing toe to toe with a hard nut called Marlo. She turns defence into attack, telling him he'd better not fuck up if he's going to be the foreman, he stalls and then she turns him around, back towards the others.
-Who pretty much ran the farming here, regardless of what Chum said? Who will run things best?
He points at Pinky, who confidently walks forward and accepts the job. She leaves him and Haystack hash out a plan for the hacienda to present to her later, and she grabs Killer to go upstairs.

Kim and Ripper take a look at Sister Assumpta and Scarlet. They give them the prototype anti-lurgy fetishes and then they make up another few to run a controlled test on 10 subjects. Kim gets some extra insight from Ripper, who's been putting together a cocktail of drugs to help people who don't have the full-blown version get over it while the fetish does its work.
Between this and Ripper's fantastic piece of breathing tech, Kim is more than a little turned on, but Ripper turns her down, and doesn't even give her the inside track on the helmet.


Dusk leads Killer into the main bedroom. When she takes off her coat, he looks like a deer in headlights. So she tells him to close the door; he can choose which side he wants to be on. He's a little anxious and after they have sex, He just doesn't know what to do now. So she wonders if he thinks it could be because he's just slept with his boss's girlfriend? She pushes, and he knows that Johnson values utmost loyalty above all things. That sends him into a tailspin, and then she tells him that this means that he really works for her now, he can't risk going to Johnson with any of what she's doing here or he'll find out. He freaks out and leaves.


Kim goes off to Serenity, but Wire's gone from there with her gang. There are tattered tents arrayed near the old hacienda. Sick people lie within, and there's a small group of Found's cult huddled around a fire in the ruins. As she pokes around, her tricorder gets another ping from Johnson's phazer. There were no guards at the gate into the hacienda and there's no look-outs here. Apparently Wire told them they'd be fine, Kobe wouldn't be causing any more trouble. 6 are okay, there are 12 with the lurgy - Goldman is the sickest and most of the rest got sick after Wire's gang arrived. But now they're driving around out beyond the Valley. 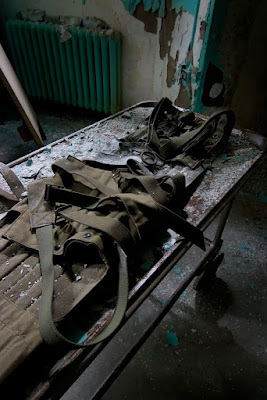 She examines Goldman more closely. Opening her brain to the psychic maelstrom, the monster are no longer cute, they're truly monstrous and the usual relaxing bubble bath has been replaced with sulphurous hot springs. Goldman is glowing in a two-way stream of phosphorescence; between him and a nearby monster which is similarly iridescent. A tentacle licks Goldman's upturned eyeball and at Kim's behest it claims the rest of Goldman's mind. He ceases glowing. Later on, during the night, his heart stops and Kim takes a blood sample. Some new information.

And then another ding! from Johnson - he's going to owe her big time!

Over the next few days, Dusk is making inroads into running the hacienda. But she needs to get back to Watering Hole - market day is coming and she needs to line things up with TumTum. She gets Killer to drive her back in, but they haven't even pulled away when Johnson drives up in his jeep. There's  big flatbed behind him and Dusk climbs out of Killer's battered sedan to see what the hell is up.

He's excited to show her what he's got, but she cuts him off. He really needs to follow the usual hacienda-visiting protocols. You know, like he'd do if he were visiting anyone else. He shrugs that off, surely that can't apply to him here!

He gestures to his guys and they pull off a big-ass tarpaulin off the back of the flatbed. On top is a long black limo - shiny and chrome. She rolls her eyes, and walk over to Killer. He'd better tell her what that is and where it came from, and he knows he has to.
It's Barker's car, but it doesn't even run, it's just something pretty to sit in and have parties.
When she points this out to Johnson he's nonplussed - of course! He just wants her to be happy, she'll get a smooth ride on top of the flat-bed truck. He storms off with his guys when she refuses, it takes an age to turn the truck around and Killer and Dusk share a silent half hour (apart from cursing from Johnson's crew).


In Watering Hoe Dusk shares whiskey on the porch with Kim and Killer (as Dremmer looks on). Kim studies him, he's a danger to Dusk and her. What she really wants to know is how they can get him to choose Dusk over Johnson. He obviously thinks she's fantastic, and will do just about anything for her. However, Johnson gave him real purpose  (a job and a roof over his head), and he feels like he owes Johnson for that. Sure, the boss is a violent guy but he takes loyalty seriously. So Kim will just have to show him that Johnson really only care about himself and not his people.

Across the alleyway, they can see some fresh graffiti: "The Whore of Babylon", "Burn the Witch!"
Dusk talks to Dremmer, she can see he's a bit hurt, but she reads him into the plan with TumTum - they're going to take these bastards down, any hacienda owner who won't play ball.

Night falls.
Dusk's door is kicked down and she's pulled, almost naked, from her bed by a couple of raging thugs. Outside there's a mob with torches and they hurl abuse at her. Dusk yells for Dremmer and Killer to help, but as they drag her away she struggles, elbowing one of her tormenters in the face and escaping.
One of the crowd shoots at her, but somehow misses and she runs past the snarling faces...


Next Session: Burning
Played by Donogh on Thursday, March 30, 2017