The same group of companions was reassembled a number of years after they had broken up. They were charged with an important diplomatic mission to the Governors of the northern Tibulani provinces to help give effect to the Queen's claim on the Governorship of Anonn, an ancient title held by the House of Tarashonis. 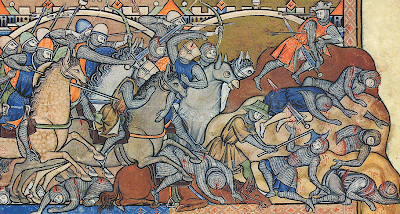 Tibulani inheritance rules are tainted by a peculiar system of elections. In particular, provinces are ruled by “Governors”, which positions, in Tibulani law, are not inherited in the proper way, but are elected from among the head men of the major clans. Inaris Tarashonis claimed the governorship of Anonn by virtue of Histran inheritance rules, but this was not recognised by either of the two warring alliances of Tibulani Governors – the northern faction (supported by Histra) and the southern faction (now hostile to Histra and dominated by one particular Governor, the magus Tokan Liod).

At the northern Governors' Conclave much progress was made in gaining Tibulani support for the Tarashonis claim, with promises that about 5000 men-at-arms will be sent to make war on Tokan Liod. Ertura's contingent were to arrive early on the east coast to aid the Governor of Nirdin. The other contingents were to arrive two years later on the west coast.

Success in war would not be sufficient to carry the Tarashonis claim, however. Hemarl would be required to produce natural-born Tibulani progeny, who would then require the support of the local clans before they could be recognised as Governor. This cumbersome requirement was deemed achievable and further planning continued.

It was here that the companions first encountered one of the Talons, demonic beings which serve Tokan Liod. According to the accounts given by my grandfather, this beast was of human height, but demonic in form, having scaly skin, dark grey or black in colour and textured like that of a lizard. The creature was winged and could fly. There are several Talons, since more than one have been seen in the same place. There are differences between them, including insofar as they carry different weapons and not all of them have been seen with wings.

Caught up in Tibulani wars


The companions travelled with the Governor of Askenji southwards to examine the frontier and prospective lines of advance for the following year. However soon afterwards word reached them of an imminent Southern invasion. After some skirmishing and raiding a large army from Dunan besieged the tower the group was in, and while it waited outside two more armies pass on the road northwards. Several battles and a siege occurred at Bar Askenji, but as a result both sides returned to their lines for the rest of the year.

After the Erturan contingent arrived in Tibulanus, the companions travelled to Bar Marin to take part in a large offensive on the eastern side of the island into Lovt. That city was besieged when they arrive, but the Erturans waded ashore and routed the Southerners.

Diplomacy at home and abroad


In the following two years two major diplomatic endeavours occupied the group. The first was for Alcura and Ertura to gain influence in the island kingdoms of Sheodar and Iaradar by brokering a peace treaty between those two warring island Kingdoms. The second was a personal priority of my grandfather - to gain support for the completion of the royal road between Karia and Alcus. This road was to be a symbol of the resurgent strength of the Kingdom of Histra, the first royal road to be built since the days of Fontarbrian dominion. As a symbol of and for Histra, the road was a failure, but as a measure to increase the prosperity of Alcura, it has proved a great success.

My grandfather also at this time made a contract with an assassin to kill Tokan Liod. This was justified at the time, as a measure which would end a decades old civil war in a single stroke. Unfortunately, the Baron made the mistake of using his closest aide, one Bilador, as an arranger of the assassination. It later transpired that this Bilador was an agent of Tokan Liod. Nothing was ever heard from the assassin again.

War continues with a disastrous setback


When the 4000 reinforcements from the rest of Histra arrived in Tibulanus, only the Matoran contingent led by the recently knighted sixteen-year old Hemarl Matora, had disembarked when a dragon appeared in the sky above the bay, incinerating the fleet and all still aboard with fiery breath.

With advice from the companions, Hemarl decided to take the offensive, and regain the initiative. Raising an army from the surrounding provinces, the army marched into the South, and was met by several provincial armies at Hoskolafa, where outright aggression and a risky deployment won the day for Matora and the North.

During this phase of the campaign, the group witnessed the attack of a wight, a malevolent supernatural spirit which possessed the body of a man. After a grim fight, the body was dismembered and the wight destroyed by fire. Wights are created by the pagan rituals of the Tibulani past, dating from before that place was converted to worship of the Gihonan pantheon. Pagan shamans still linger in some secluded areas of the Tibulani highlands. The evidence of the ritual is the tattooing of the body with a phoenix in black. The soul of the person involved is believed lost to Belgris.

As the army cut a swathe through Southern provinces on route to Anonn, an assassination attempt was made by a Talon on Hemarl Matora. This Talon was winged and appeared to be armed with two long knives (or short swords). A quick response from the companions – especially an heroic intervention which almost cost Runesan his life – saved Hemarl. However shortly afterwards a letter reached Baron Alcura from Queen Inaris indicating that she wished him to treat with Tokan Liod, and that 800 additional men-at-arms would be arriving shortly to strengthen her negotiating position.


My grandfather made an agreement with Tokan Liod and his general, Itkoviro Fenroln, that the Matorans would revoke their arrangements with their Northern allies and would instead side with the southerners. However, in his boyish innocence, Hemarl Matora refused to revoke his alliance. Instead he sprung a trap on the vast Southern army arrayed against him. Despite this tactical surprise Southern numbers and generalship – together with possible intelligence from my grandfather's false counsellor, Bilador – won the day and Matora withdrew, albeit with his army intact.

Unrest, death and the unfair trial of Swan Ertura

Leaving Hemarl behind to prosecute the war, the companions returned to Ertura and to news of disquiet in the Kingdom.

A secret embassy between Baron Ertura, Duke Komaresa and the Kalmarese Barons was planned whereby the remaining Kalmarese barons would break away from the Kalmarese Dukes. Prince Bertan Matora discovered this, and he arrested Baron Ertura from the keep in Ertures one night. Swan Ertura (the Baron's son) chased and caught the Prince's group at Prantar, only to discover that his father was dead. An altercation of some sort must have ensued, in the course of which Prince Bertan was killed.

Months later, a knight from Karia arrived in Ertures with a warrant to arrest Baron Swan Ertura. In Karia all the nobles of the Kingdom gathered for his trial; but many were excluded from the trial which was held in the Queen's council. This was clearly a show trial held for the purposes of political expediency rather than to serve the cause of justice. Queen Inaris – though she did not yet know it – had lost the authority to lead the Kingdom, and had forfeited her right to the loyalty of her subjects

The trial went well for a time, with many strong factors in Ertura's favour. However Ertura was found guilty on all counts due to the Queen's machinations. The mood was tense, and the diplomacy feverish; most worrying however was the unsettling presence in the city of many men-at-arms of various factions. The northern lords retired from the city, ostensibly in preparation for anticipated Apertan raids; likewise the western nobles stole out of the city that same night.

The Erturan Chancellor Narlos, Swan's uncle, had secreted over 160 men-at-arms in the city, and was convinced that the Queen meant to execute Swan and attaint the entire family. Narlos heroically rescued Swan Ertura from his prison and the Kalmarese nobles returned to their realms, to make ready for war. This group of 160 later became the feared Erturan Black Guard.

Baleful influence of the Arok


It is not clear at this remove how great the influence of the Arok, servant of the Seventh and sower of discord, was at this time. During the period in which the trial was progressing, the group of which my grandfather was a member was approached by Raliol, the magus who had (twenty years previously) entrusted a sword to Soros. Raliol told them that a powerful demon was imprisoned in the Royal Palace in Karia, and it should be killed. Raliol suggested that the sword be used to kill the demon, but this was not possible, as Soros had, in the intervening years, entrusted the sword to the care of the Temple of Javarus in Ertures.

The group made an effort on the life of the creature, but it exercised terrible magical powers, possessing several members of the group and causing them to fight among themselves. The group escaped, but the creature survived. The revelation of the true nature of this creature came to me only very recently, in circumstances which I will relate in due course.

It is also unclear what role Tokan Liod played in the break-up of the Kingdom. He and his Talons were present in Karia during the time of the trial. This fact was witnessed by my grandfather Wodarn, who attempted to arrest Tokan Liod but was prevented from so doing by the presence of a number of the demonic Talons, about a half dozen in number.


Whether the discord had supernatural or mundane origins, its effects were devastating to the old Kingdom of Histra. The armies of the Queen (missing contingents from the north and west of the Kingdom) and of Baron Ertura and his supporters met at Kulanan. After unsuccessful last-minute negotiations, the Banner of Kalmar was unfurled and Swan Ertura swore fealty to Duke Komaresa, now King of Kalmar. Battle was joined and, after many hours of fighting, the Histran army broke, only to be caught in retreat by contingents from Matora, Kanole and Rempathar, which dominions had sided with Ertura.

In the following months, the Kingdoms of Shanaras and Histra declared themselves, leaving the centre of the country, the Kingdom of Ankheras, ruled by Queen Inaris.
Played by Donogh on Wednesday, December 24, 2003