The crew of the Firedrake are casting around for somewhere to make their mark. There's a lot of general disagreement or uncertainty about how they can strike at the Hegemony. Snaps (Brell Veers, a Muscle) has heard a rumour that Vorex's sister recently went missing - apparently abducted by some group from the Hegemony. Giving them a bloody nose will be a bonus if they can get into the good graces of the most powerful information broker in the sector. (Also, Snaps doesn't really care for people abducting innocents to lean on their relatives) 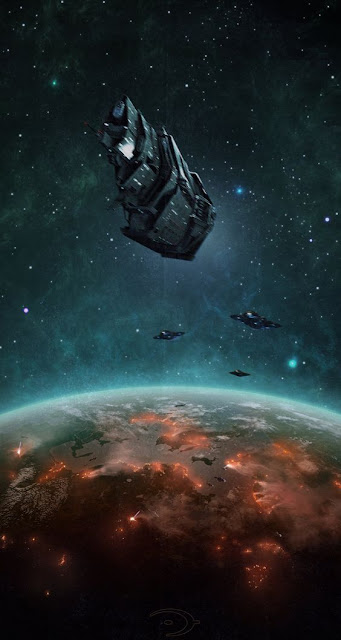 Legend (Greeg Ursis, a Speaker) checks in with Arryn his noble friend for some help on getting an introduction with Vorex, maybe to set up a contract. Lucky (Yola Zer, a Scoundrel) gives Ora, an information broker a shout - she in fact works with Vorex so she'll definitely have some insight on his methods.

They contemplate whether to go to Vorex and ask to get the job to rescue her, but they agree that they might just get shut out (as well as wasting valuable time). They cast around for some information on Samara and her abduction.
There are a few theories floating around; that they kidnapped her to keep him in check, or that a secretive cult did it to keep him away from something. People are pretty much agreed on one thing though, she's a bit of an unknown, and while she helps him out she's not a front, or the power behind the throne, and she doesn't have any enemies.

There's some back-and-forth as they track Samara's last known location. Battro & Chonzek (Snaps' & Lucky's bounty hunter friends are useful here). Data searches, trackers and facial recognition are all coming up blank. She's completely off-line now so either she's on a closed off system or has been shut out.

She was last seen heading to the Cove, a pirate and smuggling sprawl of old ships, stations and containers in the middle of nowhere. But it'd be rare for a criminal element to abuse the safety of Cove for this kind of thing - they have a pretty strict rule on not shitting where they eat where the Cove is concerned.

They get a lead, a connection with the Janus Syndicate, who deal in strange and specialised weaponry. Apparently, Samara and Viktor Bax (the head of the Syndicate) met in Cove and then his ship went back to his base on Aketi in the Brekk system.

Aketi is a flesh-eating hell-hole of a planet though. Neither Battro nor Chonzek will help them out there. Too many horror stories. Shod, Snaps' weapons dealer will help them out. He can get them a meet with the Syndicate - they need armaments right?

They leave the Firedrake in orbit, and take the shuttle down planetside. On the narrow trail to the base, they're met by almost a dozen of the Syndicate's soldiers. It's not an ambush, but they're strong-arming the crew to the meeting. Not ideal, but they can work with it.

Snaps starts to eye them up, assess their professionalism, and she starts bantering with them, and complaining to Lucky about his parking. Legend sees what they're up to, and by the end of the journey the weapons have lowered and they're on casual terms with the escorting soldiers.

The base is more like a military compound. High 20m walls with nothing outside them. The gateway has deep clawmarks in it; that's worrying to say the least. They're brought through and into a building where they meet an older big barrel-chested guy (who must be Viktor).

He dismisses the guards (very confident of himself) and yet is incredulous when they tell him that they're looking for a targeting computer for their ship's particle cannons. He insists that they tell him who sent them.

Snaps turns on him, not threatening per se, but definitely throwing her weight around. She demands that he tell them where Samara is, cause they know he's hiding her. He's shocked and caves in, though he wonders if Vorex sent them.

She's curious why he's concerned, and he just doesn't want Vorex to hold him responsible for her fate. She insisted that he set her up on an expedition into the wilderness beyond the compound, despite all his advice.

She's missing (though definitely still alive, from the signals he's getting) and her escorts are dead. The signals on her tracker aren't strong enough (or there's interference from the jungle canopy) to give them a good reading of where she is; but some cross-country driving and triangulation would sort that out.

He'll provide them with transport and a tracking device, but on the condition that Vorex doesn't learn of his involvement in this...