Word reaches the crew that there is a demon-corrupted Spirit Warden in the city; and that an Inspector is see. Locust the Whisper knows of this, as the Inspector interviewed Quellyn recently; apparently the Spirit Warden is under Setarra's influence.

They catch up with Arden Jayan on his way to work one morning. Paving the Spider has borrowed a friend's cab to keep the approach away from prying eyes. Hammer the Leech pretends that he's off-duty (not to mention a little intimidating) until their preferred customer approaches and then leaps aboard to drive the Inspector towards Charterhall. Locust and Paving get in after Jayan does and get right to the point. They're here to talk to him about the Spirit Warden. They brush past his denial that he could possibly share information on an investigation with them; until Paving convinces him that they can help with the problem.

When they wonder how he actually knows that the Spirit Warden is corrupt, he is obviously reticent, but does relate a tale of how he was in a den of ill-repute one night when he spotted a young woman descend from the upstairs room - as she passed him he spotted dark veins throbbing in her hand and blackened eyes. He had some experience with these things and thought that this was a sure sign of demonic influence so he followed her and over the course of a few days work, found out that she worked as a Spirit Warden and that her real name was Vestine Strathmill.

They have a deal - if they help him put her away, he'll apply himself to reduce their profile with the Bluecoats. 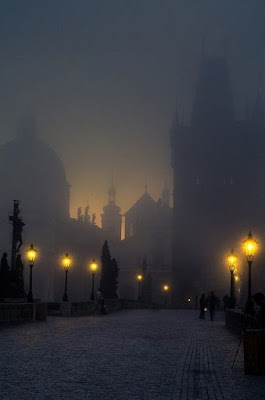 So they set to work; and their plan is as ambitious as it's complex. They'll find out if there's any incriminating evidence in her house (and if not plant some); then they'll abduct a local figure of authority (one known to support the Spirit Wardens), and stage an escape from a nefarious ritual involving sacrifice to an obvious demonic presence.

Hammer goes on a brief scouting mission to survey the Spirit Warden's house and its surrounds. It's in the nicer end of the Docks, Near the canal and across from Crow's Foot and Charterhall. The windows are tinted, and unlike the rest of the neighbourhood's houses there is little decoration or ornamentation outside. An extended surveillance sees smoke coming out of the chimney just before 8 in the evening, in anticipation of Strathmill's return - a maid or housekeeper has been working during the day. The deeds and census show that it's been owned by the Strathmill family for some sixty years, but only the Vestine appears to live there permanently.

Locust is out buying menacing looking ritual accoutrements, including a goat skull and a couple of pig fetuses from a local butcher.
Paving identifies a local magistrate, Stavrul Dunvil - a conscientious hard worker who appears to be friendly enough when off-duty; (and importantly) who takes a cab to and from his chambers daily.
He's also acquired a couple of Spirit Warden costumes - at least they came at costume prices, but in reality they do appear to be genuine, if a little old.

Locust and Hammer breaking into Strathmill's house in the middle of the night. Locust initially sends in a ghost to scout out the house for him, but it's arm is destroyed as soon as it moves through the back wall and it escapes screaming silent fury at the Whisper. They enter the back door the old fashioned way and find their way upstairs to the Spirit Warden's bedroom where she is fast asleep.

Hammer takes out his blowgun and the dart, filled with black lotus, which will induce coma-like stupor and visions for the rest of the night. They carry her downstairs into the basement, a bare room of brick and cobwebs.

Tying her firmly to a chair, Locust considers the woman, and the connection she has to Setarra. She suddenly looks up at Locust, and smiles. Hammer is confused - no one can be that lucid with a dose of black lotus in them!
Her eyes are black and she has too many teeth in her mouth, and her voice has a timbre that chills
them all to the bone.
-So nice of you to come see me Uno, I was wondering how I would entice you to show yourself again
Then, with impossible strength, she breaks her bonds and kicks the chair back
Locust steps back, holding his prized demonbane charm out towards her, and that does see, to give her pause. In flies Shrike the Cutter who has been watching from the stairs. Shrike fists glow with that blue lightening but despite the damaging attack Vestine/Setarra grabs her arm and goes to take a big bite out of her shoulder. Shrike goes with the flow and is instead slammed into the brick wall.

Shrike's winded but her leather jacket takes most of the force out of it. They all notice dark water rise up out of the ground, quickly covering the floor and working its way up their feet. Panicking a little, Locust jumps on top of Vestine/Setarra with his demonbane charm tied around his fist. Hammer slams a dose of Spark into Locust and the energy cascades through Locust as he punches repeatedly to her head. The charm burns Vestine/Setarra and eventually she loses consciousness. Shrike whips out an enchanted chain to restrain her, and maybe stop Setarra from taking control again.

Paving drives the cab past the magistrate's house; a couple of blocks away from where Strathmill lives. Dunvil leaves at his usual time and calls them just on cue. Hammer sits quietly in the shadows of the cab, in the Spirit Warden garb they've acquired. As he readies the blowgun at point blank range, a neighbour leans in the window to speak with Dunvil, who's still standing on the step and yet to sit down.

The conversation goes on for a minute (about thoroughly mundane neighbourhood matters) and eventually Paving loses patience and ushers the goats into action, driving away. Dunvil stumbles into a seat, though not his usual one; he actually lands right next to Hammer. He opens with a 'Good Morning' and Dunvil is thoroughly confused and a little outraged with someone sneaking into his cab! With the range too close to use the blowgun Hammer draws a pistol and goes to knock him upside the head with the butt.

Maybe it's the close-range and the surprise, but Dunvil is able to defend himself with his briefcase. In the chaos the gun discharges into the air. So Hammer stabs him with the sedative dart from his blowgun instead and Dunvil collapses despite his valiant defence. Paving picks up speed and the Dunvil's briefcase falls out the window - the concerned neighbour calls for the Bluecoats and they're suddenly racing the clock!

Locust is setting up the ritual space as quickly as he can - he's including a torn page from an occult calendar suggesting why today was the best day for a sacrifice. His preparations will be uncovered by the housekeeper, who will arrive imminently; so Shrike is standing by the door to open it for the woman.

She's left all of her obvious gear aside, so as not to arouse more suspicion than necessary. Shrike pulls off her creepy girl act (a little too easily) though Alayne, the housekeeper, does complain that she must soak her lady's oats now so that they can be ready for later. Shrike flexes her fists, causing a brief static flicker to discharge, convincing Alayne to leave now. The woman scurries away, but it's now obvious that she is leaving to report this dubious girl and whatever untoward religious ceremony she's involved in to the authorities.


They set a watch, to ensure that they're not disturbed by bluecoats, and as soon as Paving and Hammer arrive, they unload Magistrate Dunvil and Paving drives off, to draw some of the heat away.

Waking up Dunvil to witness the climax of the 'ritual' with chanting and flagellation, Locust manipulates the electroplasmic energy to give off a (mostly) fake explosion which is noisy and impressive, which flings them all to the floor.

Dunvil's bindings have become loosened and the crew escape, leaving the still comatose Strathmill (now dressed in their spare Spirit Warden garb) behind. When the Bluecoats arrive they are sure that Dunvil will have the upper hand.


Paving, closely pursued by a patrol of Bluecoats, ditches the cab next to an alleyway near a market, and escapes on foot. He'll have to pay his cabbie friend to retrieve it from the pound later, but it's money well spent.

Their newly recruited band of Rooks (Ludmilla and Argent Dolvestri, a delightful married couple that got blackballed from Paving's favourite theatre because they are dedicated revolutionaries) did get picked up by the Bluecoats, but they pay off the watch sergeant to release them.

Paving has been busy digging and otherwise preparing graves - he's looking forward to putting some worthy soul inside them.

Shrike visits the Archive of Echoes, communing with a long-dead ancestor, who appears to have had a similar gift, and who also had a weapon capable of withstanding (and possibly channeling) the mystic energy.


Next Session: Highway Diplomacy
Played by Donogh on Saturday, July 15, 2017