Paving the Spider has his ear to the ground - he's trying to identify a high-society party which will give them an opportunity to steal something valuable. From their Ink Rake contacts (gossip columnists are the best!) they hear about a soiree at the Iruvian Consulate; a masquerade ball to welcome a new VIP who is arriving from U'Duasha imminently. There is an associated occult ceremony and the paraphernalia will be valuable.

The new consul must be bringing in personal effects as well as this paraphernalia, so instead of infiltrating the consulate, they hatch a plan to hijack the goods when they arrive from Iruvia. Salia, their friendly information broker can't find any details of a shipment arriving through her stevedore/docker contacts, and their rail research suggests that the consul is bringing personal luggage only.

Digging deeper, they discover that the Leviathan Hunter 'Hotspur' is making a direct delivery of some boxes and crates - using only the crew and not the stevedores who work the docks. They're understandably upset at this attack on their traditional rights and duties, and the leader, a brutally honest Ripley, complains that this is just typical of the Leviathan Hunters. They place themselves above the dockers and other working folk, even though their rates of death in service are no higher - they play the 'dangerous demon-hunting' card to gain privileges they don't deserve.

They will interrupt the wagon with the Ripley's stevedores blocking the street to the consulate, and then hijack it from under their noses. Ripley's people will only bring clubs so as not to prompt a bloodbath which might attract too much attention. The two allied groups will split the bounty. 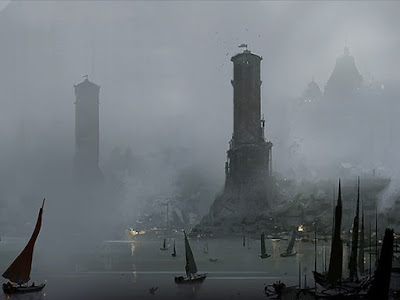 Locust the Whisper has been working on his ritual: it enchants a person to look like someone else, anybody else - but different for everyone who sees them. It draws on the powerful imagination of children (using baby teeth as the focus) and leaves the target with strange blank and black eyes. In the back of Locust's mind, he fears that this leaves the target open to demonic possession, as those eyes remind him of how Vestine looked when Setarra possessed her

There are six crew members bringing the wagon to the consulate. The wagon is being hauled by two sturdy goats and inside there's an assortment of crates, barrels and boxes. On a narrow street with a long way between junctions, 14 or 15 stevedores step out to block them off. Insults and abuse are hurled from both sides, but the number is just enough to make a fight possible but not likely.

Paving throws a smoke grenade into the wagon from a window above (one he liberated from Hammer's stash). It lands in between the cargo and spews out a torrent of smoke, enveloping the whole thing, along with the couple of crew still aboard.

Shrike the Cutter sneaks out from behind and jumps up on the wagon to drive it away. She kicks the goats into action (something Paving, with his cabbie experience, was able to drill her in) and they start through the shoving mob ahead of her.
The stevedores have pulled the ship's crew slightly away from the path of the wagon and clearing the way for Shrike. A wary Leviathan Hunter jumps aboard as it passes to confront Shrike. Seeing their comrade in trouble, Paving jumps down from his window, landing heavily alongside to fight the sailor. He throws a vial of potion at his face, but the sailor dodges it with relative ease. A cutlass is thrust into him, but Paving's leather armour takes the brunt of the damage. They both fall off in the struggle.

Locust leaps down, landing on the rising sailor and knocking him out just as he goes to skewer Paving for good. The two grab each other, hobbling a little, to jump on the wagon as it reaches the end of the street. The grenade is still aboard though and they're leaving a trail of smoke behind marking their progress clearly.

There's a moment when the assembled Leviathan Hunters weigh up their chances, and instead of fighting or breaking through to follow the wagon, they withdraw to get reinforcements. This gives them all the chance to disperse, and the barge and gondola that the two groups have gathered are useful in moving everyone and the booty away quickly.


Going through the loot, they payoff Ripley with the bag of gold (about 3 purses of silver worth), which seems fair - and rewards the two groups interests and abilities.

One immediate outcome that becomes clear is that Dowler, their explorer friend, leaves their company. Apparently he was relying on the Iruvians for his next expedition, and he cleaves to them.

They approach the consulate to get a payoff - they'll sell back his goods to him for a hefty price. Their rooks - the Dolvestri couple, deliver the offer. However Ludmilla returns after a half hour to relate that the consul has take Argent prisoner, with a demand that they meet immediately in person to arrange an exchange for the items.

They meet on a train carriage in Gaddoc Station - security will help ensure that weapons and violence are minimised. A 1st class carriage is connected to a cold engine at a secluded platform. Paving and Shrike walk in.

Two professional looking bodyguards are on the door (they're armed with swords) and behind the consul are three Red Sashes, including Mel (who they 'crossed blades' with a while back). The consul sits in a comfortable arm chair, pouring tea for Argent behind him.

He's a young man, sitting comfortable in expensive (if crumpled) travelling clothes. He is calm and authoritative - everyone else in the carriage heeds his direction carefully. The presence of those very same Red Sashes they encountered when muscling in on Sanaat's covert drop speaks to a really impressive knowledge of their affairs, or is very suspicious. Either way, it's a message to them.
He introduces himself as Avid Anixis and bids them to sit down, if indeed they have his property and wish to return it.

Paving responds politely, bringing out a hanger of clothes to show that they do. He also wonders if Argent can leave, as Anixis clearly meant to hold him only to bring about the face-to-face meeting. The consul nods, and gestures for Argent to leave, there's no dissenting glance from the Red Sashes or his bodyguards and as soon as Argent is out of the carriage, Paving sits down opposite Anixis.

Paving smiles and tells the consul that he hasn't pawed his way through them - about 8 purses of silver should suffice for the trouble of delivering the goods to him intact. Anixis shakes his head, thinking that a much lower price was what he had in mind.

Paving's smile disappears and he insists that is the only price they'll accept - Anixis' composure doesn't break but his pleasant manner disappears. He nods and Shrike leaves to send the signal to bring the rest. When Paving suggests that they exchange some tales to pass the time, Anixis is cold - his appetite for stories is much diminished when he is not in amiable company.

He warns Paving that there will be horribly painful deaths, or ever horribly painful lives, if any of his property is missing or if they cross him in future. Paving has heard it all before, and grins; thinking of an unoccupied shallow grave under the cobblestones that awaits this consul.
Played by Donogh on Saturday, July 29, 2017