Gap the Lurk has returned from his extended absence; he doesn't seem willing to speak of the revelations which pushed him over the edge. His talents will be perfect for this score; they're going to undertake a dangerous job in service to the Throne of Judgement. With Fancy Frank the Hound in tow they'll infiltrate Strangford House on the day of the house matriarch's funeral.

During the final stages of the wake and before the funeral procession winds its way to have her remains consumed by the electroplasm of the Spirit Warden's crematorium; they will steal the traditional Akorosi funeral offering of a coin from her mouth.

They consider staging a diversion but instead just sneak in, taking a boat from across the canal (where their new turf is located) and creeping through the grounds and inside. There are enough strangers and temporary staff that their presence will hardly be noticed. 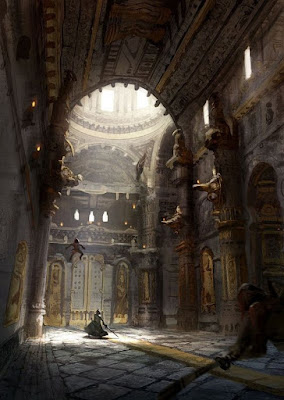 Gap's closest friend, Roslyn Kellis has a genuine invitation to the funeral and he has given her a special dog whistle to alert him when the coast is clear - he has a matching ear-piece so that he can hear it.

They're rounding the corner on the 2nd floor landing when Fancy Frank sees a familiar silhouette in a room yonder. He stops and cocks his head; it's Casslyn Tyrconnel - whose younger brother he killed in the Skovlan Unification War. Behind her is Casta, his old friend who tried to stop him and has recently been hunting him for a significant bounty. Fancy Frank's uneven movements attract attention and as Casta points him out to Tyrconnel, the pieces fall into place - Casta is hunting him on her behalf.

Gap walks right past them, and choosing his moment, quietly sidles into where Lady Strangford lies in state. A mourner gets the wrong idea and leaves them alone with a respectful nod. He quickly opens her mouth, struggling against the rigor mortis and fishes out the coin. It's gold, not the usual silver, but Gap takes a close match out a purse of random coins he set aside for just this eventuality.

He slips out of the room, and into a foyer where a large number of guests have gathered before the departure. Gap spots Orlan Strangford (the leader of the cult's adepts) speaking with his father. He avoids Orlan's eye line - that's one conversation they can't have here.


Fancy Frank runs deeper into the house and up two floors. He's not packing much, and frees a pistol to turn on Casta when he can get the drop on the canny bounty hunter. However, he ends up on a dead end landing - some of the renovations mustn't have gone to plan. Casta draws a fine pair of pistols (the very same ones he lifted off Fancy Frank back in Sunfall at their last run-in) and fires a round at him. Lady Tyrconnel has kept pace with him, and Fancy Frank's return fire prompts Casta to pull her to the floor to avoid getting shot - Frank's fire hits Casta but the bounty hunter must be wearing armour as he turns back around to take aim with his second pistol.

Fancy Frank considers his options and jumps out the landing window...

Gap is eyeing up a big payoff for the score, now that he's undertaken the necessary obligations. A small ornately carved hardwood chest sits on a small table in the centre of the room. People are dropped coins into it as they pass. This collection is probably going to some favoured charity of other of the Strangford's but the amount is too tempting to pass up. Gap, as cool as you like, trips up one of the guests, who pulls at the table cloth as he falls. Gap catches the chest as it topples off the table, and using other people's movement (helping the man back to his feet) as cover the lurk empties the chest into his cloak - he opened a vial of silence potion in one fluid motion, and that masks the sound of the cascading coins. His cloak has a hidden pocket which carries the coins without too much bulging and he walks out, calmly and as if nothing has happened.

Gap is outside waiting for Fancy Frank when he sees the hound leap from a fourth floor window. Even with their placement of a rope dropping from the eaves all the way to the ground, there is a moment there where it looks like it's not going to well for Frank!

They run into a couple of household guards, but then Fancy Frank pulls out one of Orlan's standstill bombs and takes them out. They row away into the fog and the hound shivers in reckless abandon.

Roslyn Kellis is questioned by the Bluecoats - it would appear that they know she's connected somehow, but the Orphans pay them off and she's left go free.

Fancy Frank reckons he can no longer ignore the perils of being hunted by Casta. Getting help from Steiner and Veleris he starts to track down some of Casta's habits in Duskwall: apparently the bounty hunter frequents a bathhouse in Six Towers. That'll help ensure that his enemy has little gear when Fancy Frank makes his move.