in which everyone involved tucks in for a second generous helping of this savage world. 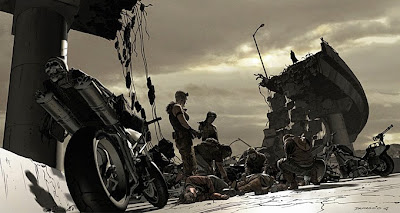 As Parcher's gang stand to, and it's obvious that Chaplain, Charlie, and Beagle are standing alone in the middle of the square, negotiations continue, albeit at an accelerated pace. The final part of the deal falls into place; in which Beagle promises to help Chaplain get rid of Dust. Charlie tells him the Glassjaw Johnson was behind the assassination attempt and the deal is done.

Parcher's people are in force, over 50 of them; a lot of them armed with crossbows (Parcher takes the danger of fire seriously!). They circle the hold and square quickly and efficiently.

The only person not clearing out is Vision - he's overwhelmed by the psychic maelstrom - Baa's mother is in bits as swirling chaotic darkness surrounds him. It asks what Vision will do when everything goes wrong. He defiantly proclaims that he will protect everyone!

Chaplain take a deep breath and considers his options. Never thought he'd be fighting his way out of Gusher. But that will work to his advantage. The gang in Gusher never really have to think about people starting a real battle inside either. Internal security is usually confined to crossbows and bats. Their morale will crack easy if forced to fight inside their own hold. Fighting his way out will be relatively easy - they're drilled for an alert, but their positions were all assigned for an external threat. As Chaplain calculates angles to himself he grins - Oh, and that sniper in that watchtower will have to be the first one to go.

Out of the corner of his eye he notices that Beagle has positioned himself level/slightly behind Chaplain - just so they're aware of each other, but not in the way.

After what seems like an age Rex comes out (who's Parcher's 3rd or 4th lieutenant) to call them inside for a chat with her. Chaplain browbeats Rex into standing the gang down before they move an inch.

Pallor slips past Parcher's gang - he's never seen Vision so vulnerable. He tries to connect to Vision, but is immediately sucked into that chaotic maelstrom. Vision reads Pallor's brain clearly for the first time and sees his secret pains. He loves watching people, but they hate him because of his weirdness. He feels he must be an outcast, but he needs to be close to the very people who cannot stand to be around him.
He also craves forgiveness - back in his home settlement, he tried to get people to love him; but he hurt their brains and drove them all mad. Some of them died from the madness or had to be put down. He hasn't been back there since.

Finally, both of them start to come around - they feel polluted somehow, and when Gabe tends to them he discovers that they've got the same kind of infection as Colonel's daughter. A couple of aspirin aren't going to take care of this, especially when he realises that opening his brain while using his healing touch has led to his catching it too!

Chaplain, Charlie and Beagle are led over to a tight alleyway alongside the central compound. Parcher's newest bodyguard stands between them, with guards arrayed at both ends and by the gate inside.
She calls over Charlie. He plays the innocent, not giving her any information which might point the finger away from them and towards Beagle and/or Dust. Parcher seems to believe his story but doesn't trust him.
Beagle goes over next. But as they talk, one by one each of the people Charlie saw in Beagle's tent earlier come up to Parcher and have a quick conversation with her. As Beagle is about to finish with Parcher, some of her guys come up - they have Glassjaw Johnson and one is holding a sniper rifle. Glassjaw obviously has no idea what's going on, but Parcher passes judgement on him and is fed crude oil in front of the growing crowd.
A nasty way to go. Chaplain has a hard look on his face. And as Beagle passes him, Chaplain asks him if this is the price. Beagle smirks, but tries to give the impression that he has no idea what Chaplain is talking about.

As they make their way back to their trucks, they notice the Leafy Hollow contingent, now led by Dust preparing to leave. Chaplain can't resist a walk by and as he approaches, Dust's two lovers, Bones and Mud, close ranks. Dust waves them off, he's the same self-assured and cocky bastard as ever. They exchange a few pleasantries and then insults. But Chaplain's assessment is that Dust is grinning inside and out because he knows he got away with it. He'll go back and take over Leafy Hollow now (to start with). But really, he just wishes Chaplain would draw down on him - he's confident that the three of them would take care of him, and if not Parcher's people (or her brand of justice) would. Chaplain leaves them drive off, but doesn't want to give them too much of a head start, so he gets the Maersk lot ready to leave first thing in the morning.

One of Vision's cult, Rebecca, has disappeared. He and Charlie go looking for her. The main gate has no record of her leaving, In plumbing the maelstrom for sign of her passing, he sees Charlie brought before a throne, where sits his father. 'James' is disappointed in Charlie - not all who got sick died. Charlie recoils in horror. Did he leave his father to die alone in their cabin? But he snaps back to reality to share a sudden urge to look for a black muscle car - driven by AT (one of Parson's gang) through the gate less than an hour previously.

They get a bike from local tough Hammer to make chase. They need to sweet-talk Hammer into giving it up, maybe Charlie will have to give up something else to him when he returns. Vision disperses the mob which has gathered for blood.

They chase! Vision holding on for dear life as Charlie guns the throttle as much as he dares now that night has fallen. Somehow they do catch up with the car, Charlie pulls level and points his pistol in at the driver, but he swerves towards them and Charlie has to struggle to stay on the road. As the car accelerate away into the night, Charlie takes aim at the tires, but when the car hits a bump the rounds enter the boot instead - they both know Rebecca is inside.

As they try to make their way back to Gusher, their motorbike breaks down, and as they struggle to repair it, a truck, maybe a big 4x4, passes them. Vision looks inside, sensing utter terror inside the maelstrom - something monstrous is inside the truck.

Gabe is in a bad way back at Gusher. Looking for help, he pays off a local gang member to get him to Pallor. He finds temporary refuge with a young family - they look pristine to him. Clean and friendly, he has no idea how. Pallor picks him up in the morning when his fever has broken.

Chaplain goes to see Parcher before they leave. He tries to convince her to help him out, but she's not impressed. She doesn't want any more heat - he must make peace.
Played by Donogh on Thursday, February 26, 2015