Shank, leaving Rudiger and Fafnir spooning against the cold in their makeshift shelter, decided that the best use of his time was to carouse with the best of them in the best inn in town. 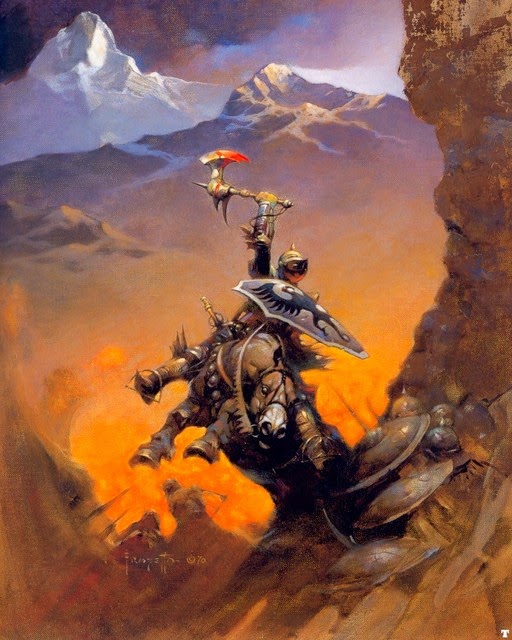 His revelry uncovered a nugget of information: Lord Dunwich, chief nob in Ennet Bend, was bringing in silks with town merchant's money, and dodging Imperial taxes and possibly trading with Orcs. Shank has become friends with Hob, one of the guards in Dunwich's employ, and Hob was altogether eager to make a little cash on the side. Shank was convinced that this was the route to quick riches.

After some discussion, Fafnir, despite cultural misunderstandings, simply could not see a way to make this pay. Certainly not without a hue and cry into the bargain. So they decided that knowledge was power, so they would find out more. Shank, posing as a dock hand began observing and poking about the docks. Fafnir preferred to stay out of site: he took the opportunity for a bath. And took his meals therein!

They watched as Farley and Morgan, the merchants, arrived and took their silks. Next Walton took his to a warehouse, before heading north. Lastly, Emery, a shadowy fellow arrived and left.

Whilst Fafnir and Shank sat on the dock bickering over ham sandwiches, well heeled townsfolk arrived and got on board the barge, the 'Chaffinch'. These turned out to be none other than Dunwich himself, with his entourage. The barge pushed off away from the dock and ever so slowly made its way south along the river.

Fafnir and Shank took up the chase, keeping far from the riverbank, but easily keeping pace with the sluggish barge. They watched as it stopped at a deserted spot, dumped silks on the shore, and proceeded south. They kept watch as a party of orcs arrived, claimed the silks and left. None the wiser, they headed back to town, puzzling at this new development. They came to the conclusion that this was a protection racket and Dunwich was paying his dues. The Empire would not approve, but still, it's a lot cheaper than a war.

Shank turned his attention to the missing dwarven crown, once again. His enquiries received a very cold reception from his underworld contacts, but with some pushing he was advised to 'drop it'. "'The Queen' has it, and you do not want to be noticed by her."

This sparked some memory in Shank - The Queen is a powerful Sorceress who lives in a spire in the desert, with her minions. She has also enslaved one of the Barbarian tribes.

The party decided that there was nothing for it but to head directly to confront her!
Played by Donogh on Monday, June 09, 2014