As the rest of the band  battled for their lives against orcish monstrosities, Fafnir chose his own path, tracking the orcs as they left the ruins of the former Dwarven hold.

The orcs marched in a huge throng, protecting their loot, including the Box of Holy Dwarven Things. Fafnir watched as war bands peeled off the main throng to head off in different directions, but kept his eye on the prize. Unfortunately, whilst creeping ever closer to the enemy, he was spotted by scouts and in his hurry to disappear, fell a-foul of something foul and stepped in some rancid and most pungent dung.

Despite the smell, or maybe aided by it, a raiding party of orcs harried Fafnir though the hills back to the hold. The Giant's mighty endurance did him proud and despite the orcish legendary speed over long distances, he stayed ahead of them until in the shadow of the curtain wall. Two orcs had ditched their shields in favour of speed and caught Fafnir meters from safety, much to their cost. The fight was short, brutal and bloody, but allowed more orcs to crest the rise. 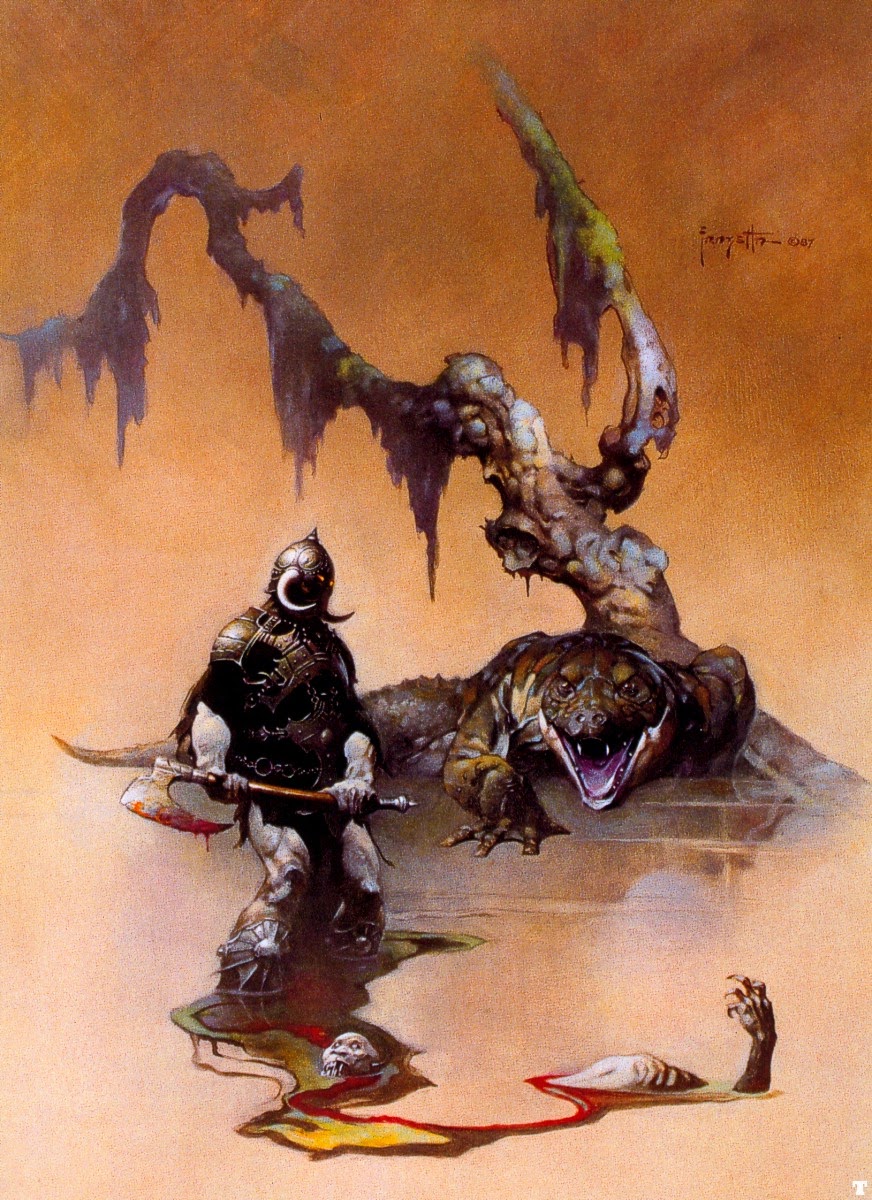 Bjorn, a travelling Dwarven Cleric, saw the fight from a postern gate, and calling to Fafnir, extricated him from what could have been a rather nasty encounter.

Bjorn called to Hastor, his chosen deity (which caused Fafnir to wrinkle his face in confusion), to show him the way. Duly elucidated, the duo set forth through the tomb-like halls of the ransacked hold. Fafnir ignored Bjorn's claim that he was not from here, assuming that the dwarf obviously knew his way about, as this is where Dwarves live, right?

Descending a stairs from a mezzanine, they witnessed the remains of a scene of carnage. Dead dwarfs lay in pieces and piles on the ground. It looked like some sort of last stand. Then Bjorn realized something. The smell from Fafnir's faeces-covered boot mingled with another smell, coming from a newly-cut rough-hewn passageway: that of troll. Looking to lessen the odour, Bjorn sanctified the poo on the shoe, whereupon it hardened to stone. Fafnir must get new boots. 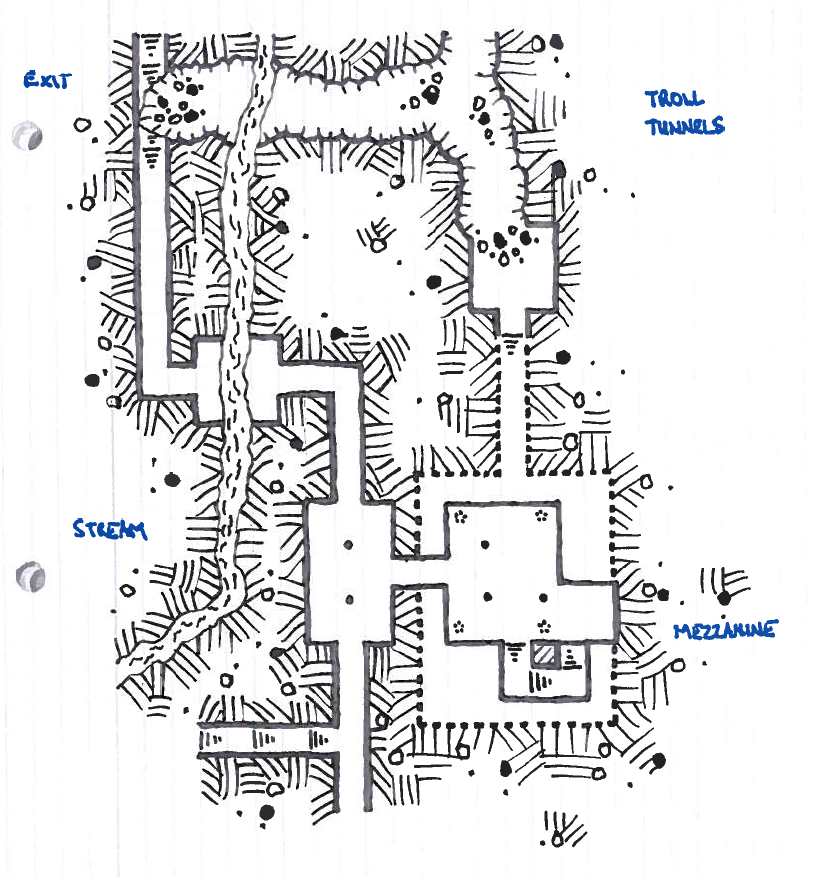 Exploring further through the tunnels, they found a stairway, collapsed where the wall had been smashed, and below it more dead dwarves and pieces of troll. The troll dismembered parts were twitching, and when the light was brought closer, they could see pink new flesh stemming from old wounds. In addition, it looked like a single body part could regenerate into a complete troll, given time! This gave the party pause for thought. And not a little panic. Everyone gave thanks to their chosen higher powers that these ones were currently 'dead'.

Bjorn and Fafnir ran into Rudiger, cleaning his mighty Dwarven cleaver. They decided to leave the hold and track the Box of Holy Things. Tracking the orcs proved easy, given the head start provided by Fafnir's earlier scouting and they soon encountered a war band, in camp.  The party ambushed them and slaughtered them without hesitation, for no good ever comes from an orc. Fafnir happily told his friends "My people have never had truck with the orc. Orcs are animals. <<ka-chock! splat>>". They found a scroll, with unfamiliar writing upon it. Fafnir tried sounding out the letters, but the clouds darkened and gathered above him... Fafnir, rather upset, stopped reading. He urged the party to destroy this Scroll of Evil, but Bjorn insists on keeping it 'safe'. Fafnir will have to keep an eye on this one.

The trail leads to Brindenberg - an Orcish town. Fafnir's mind spins at the thought of these animals having a town. Bjorn attempted to divine some knowledge of the town, and the Box of Holy Things, but it seemed to Fafnir that his god hated him now. Obviously a direct result of the Scroll of Evil.

In any event, an orcish shaman detected Bjorn's magic and was not happy. Once more, the clouds gathered and darkened directly above us. We ran away! Evil is in the air!

We went south. To find dwarves.

After many days, we reached the dwarven hold of Mayhill. A thousand Orc campfires burned all around it. We debated entering the hold to aid the dwarves, but Rudiger was unaccountably nervous and demanded assurances that the dwarves would not take exception to any of us. Bjorn could not speak for Mayhill, but as he hails from Arbour Deep, and is a person of substance and (short) standing there, we decided to use our last meagre trail rations journeying the last couple of days to get there instead to warn them of the orcish threat.

We camped in a hollow atop a small hill. As luck would have it, as we sat around our campfire listening to Rudiger tell us how fire does not burn the trolls in this part of the world, what looked like boulders in the half light of dusk woke up and stood. We faced our first troll, and the battle, it was truly mighty!

We stood above the mangled troll, bloodied and bruised, empty vials of healing potion scattered about like leaves and watched it ever so slowly start to heal. It would be many hours before the troll might stand, but we decided to not be there to see it.