In which a lot of people get what's coming to them. 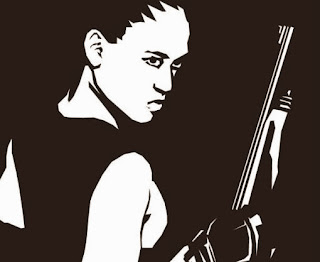 Everyone has gathered in Stolo for the attack on the pirates' base:
Miss Roberta doesn't want to lead her gang so she takes the controversial decision to send Drexler in her place. She'll stay behind with Gnarly and Tum Tum to take care of the Rosa Lee. Jackson will lead the attack instead. The plan is as straight-forward as can be: they steam up the river and shoot every pirate they see. Jackson asks Miss Roberta for the rocket launchers back, he thinks they'll do a lot of good in the attack, especially against any bigger boats or strongpoints the pirates might have.

Tai has been in the workshop, he's rigged up a large hot-air balloon which'll hold 1 or 2 people max, it attaches back to the Rosa Lee by cable and winch. This should allow them to get a good view of what's up ahead of the attack, but also, just in case there are any surprises coming at the Rosa Lee from up or downriver. Rather than waste one of their radios, they'll just use a simple set of flag signals.
Fleece, Stolo's quartermaster has been helping out Tai and Bar armouring up the barge's which will be involved in the attack.

Sweeney's been spending some last minutes with Mercury, but while he's saying his goodbyes he catches word that The Harridan has been seen across the River with her crew - this could definitely complicate matters for the attack.

Drexler decides that he'll lead the Rosa Lee's gang to that bank with their guntrucks and clear the way to ensure that the fleet isn't ambushed from shore. Sweeney'll take his launch with the main attack so that they, Drexler's group and the Rosa Lee will be able to stay in radio contact.

Drexler sets off, heading along a rough road in the direction of the pirates base. He spots other tracks from off-road vehicles going in the same direction, though it's difficult to tell exactly how many. As they're picking their way through a dry gulch Drexler thinks to himself that this would be a perfect place for a ambush.


On board the launch at the tail-end of the flotilla, Sweeney is musing about the attack, while they've got at least a parity in numbers, their barges are tougher and better armed than those fanboats. He's still worried about it and opens his brains, fishing for clues.

Princy turns around from the wheel, but it's not Princy anymore. As it walks closer to Sweeney it grows taller and taller until it's got at least a foot on him. The clothes have changed too, no longer the leathers Princy favours, but a brightly coloured poncho. But most of all, Sweeney sees its eyes: they're gone and the dark pits are beginning to glow red.
-You fucker
It intones
-You left me to die in that blasted hell hole. But you're going to make it up to everyone else.
Sweeney backs away until he reaches the stern gunwale. He recognises that voice, it's Crow (and Crow really was that tall).
-The Harridan is going to gut you, no matter how you try to slither your way out of this.
Sweeney grabs for something as flames start to pour out of Crow's eye sockets, but in his terror he falls out of the boat.
-Just kill Kray and put an end to his plans you piece of shit. The Maelstrom demands it!
Sweeney swims for the shore and is eating dirt and gravel there as the launch turns the next bend.


An explosion rocks the front guntruck, Drexler sees Crimson and T-Bone torn apart in the blast. The other two trucks come under fire from the raised bank and they turtle up as best they can. They return fire but at this rate it's only a matter of time before they get beaten down. Drexler is trying to see any way out of this alive when some primal instincts take over and he just stands out of cover and charges up the slope towards the main concentration of force.

As he reaches the top, somehow unscathed, The Harridan steps out. Through his blood-soaked vision, he just sees this black demonic figure unsheathing a giant sword. He rushes in, pumping his shotgun to make sure he's good. He takes the cut on his left shoulder piece and it cuts right through (that'll sting later), he grabs the sword and raises his shotgun, pulling the trigger and blowing through The Harrridan's face before she has a moment to counter.

Sweeney trudges around a hill just in time to see Drexler take The Harridan's bloody sword and turn towards her gang. They stare towards the gory figure on top of the rocky bank in awe. They're Drexler's gang now. The Harridan's right-hand man, a grizzled aul fella with crazy-ass tattoos named Chaplain tells Drexler their plan with the pirates and Drexler crams everyone onto one of their four gun trucks. They're heading for the pirate camp and they'll shoot the hell out of anything that stands against them.

When the dust has settled, the news from the flotilla is grim. The pirates have been all-but wiped out to the last man, but the butchers bill is steep:

Amongst the ramshackle town they find a small horde of young children and a few women. It would appear that most who were capable of using a weapon were involved in the battle. While searching the camp, they discover one defiant woman who had been locked up. She treats her rescuers with contempt and makes for the nearest stockpile of weapons to arm herself and flee before Sweeney talks her down. This is Jess, Hammer's wife who had been a prisoner since Dremmer took over. She's obviously useful to have around, and Miss Roberta takes her on board as a full member of crew.

They do keep an eye out for Rolfball's children who were taken (poor Rolfball was one of the casualties in the attack) and both Clarion and Matilda are recovered. The holds are divvying up the loot from their victory, so Miss Roberta wants to take a bigger cut of the equipment, and only take on useful people as crew members. The rest will probably be sold as slaves up to Jade Falls.

*All illustrations by D. Vincent Baker from the Apocalypse World rulebook
Played by Donogh on Wednesday, June 05, 2013